Bad Weather and Your Home Concrete 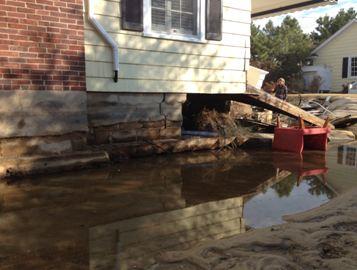 Quality Concrete's sister company Quality 1st Basement Systems is no stranger to natural disasters that damage homes. Since 1987 the Perth Amboy company has been repairing damaged foundations and installing waterproofing systems to protect basements and crawl spaces from flooding in the New Jersey and New York areas. Their role in coping with the devastation brought on by hurricane Sandy began even before the storm arrived a few weeks ago.

“In the run-up to Sandy, we installed about 100 sump pumps in just six days,” recalls Bob Cherry, general manager at Quality 1st Basement Systems. “People remembered losing power after hurricane Irene, so they wanted battery backup systems to keep sump pumps operational in the event of a power failure,” he explains. The service department and inbound calls were very busy, but Quality 1st made it a priority to reach every customer they could before the storm hit.

Of course, even a state-of-the-art sump pump couldn’t protect beachfront houses that were hit by Sandy’s storm surge. But Quality 1st began addressing these major repairs even before they had power restored to their headquarters in Perth Amboy, New Jersey. Jazz Pared, marketing coordinator for Quality 1st, helped organize a team of volunteers to clean up Perth Amboy’s storm-ravaged waterfront over the weekend of Nov. 3. This was an effort that included Perth Amboy mayor Wilda Diaz, New Jersey state senator Bob Menendez and dozens of local high school students.

Although Quality 1st was without electricity for two weeks, crews were able to get out, assess foundation damage, and schedule restoration work. Normally, contractors can’t begin to reconstruct foundation walls in sandy soil that’s still wet and loose. But Quality 1st has access to steel helical piers that can be driven into the soil like giant screws, providing solid support for footings and foundation walls. “We’ve used these piers extensively to overcome weak soil conditions,” Bob Cherry explains. “They’ll definitely help to speed the reconstruction process, while also increasing the wall’s strength and stability.”

Homeowners aren’t just rebuilding their foundations; they’re also raising and reinforcing them, according to Cherry. “In addition to helical piers, we have other engineered products that enable us to make foundations stronger,” he says. “And we’ve been building and repairing houses long enough to know what works and what doesn’t.”