Gov. Chris Christie recognized Quality Concrete's donation to help a couple whose home was destroyed by Hurricane Sandy one year ago. 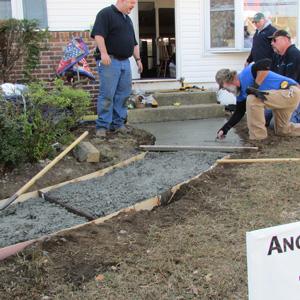 Quality 1st Concrete crew members help pour concrete for the walkway of the Ciangiotto's Union Beach home that was destroyed by Sandy.

On the one-year anniversary of Hurricane Sandy, Quality Concrete donated concrete for a home restoration project in Union Beach, NJ. On October 29, 2013, New Jersey Gov. Chris Christie visited the Union Beach residence, as well as other nearby towns that were affected.

John and Angela Ciangiotto lost their Union Beach home in the hurricane after residing there for over 43 years. Quality Concrete, a concrete supply company based in Perth Amboy donated concrete for the walkway of the Ciangiotto residence.

“I’m as emotional today as I was the day of the storm,” John Ciangiotto said.

The Ciangiotto’s previously hired a contractor to restore their home, but the contractor disappeared without ever finishing the project. Quality Concrete and their parent company, Quality 1st, were also affected by the devastation, but despite their own hardship, Jon Nero, dispatch supervisor at Quality Concrete believes that every homeowner deserves to have a contractor who they can trust.

“Following Hurricane Sandy, our building in Perth Amboy was without power for two weeks, but our crews still managed to get out to assess and repair homes,” said Nero. “We are happy to help our community any way we can and to help residents like John and Angela (Ciangiotto) reclaim their homes.”

While visiting the Union Beach home, Gov. Chris Christie gave a speech on rebuilding New Jersey communities affected by the storm and he also thanked all the volunteers.